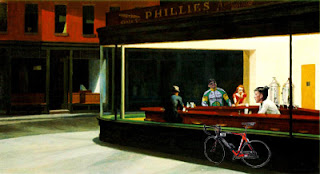 This Photoshop job cracked me up. Source: http://www.bobkestrut.com/category/fun-with-photoshop/
at 2:24 PM No comments:

It's about 36 degrees finally and I am laid out with a bad cold and feel like crap. It was warm like this in early January but I missed it because I was in Anchorage. I hope some of the slop in the streets melts; the paths and main roads are fine but the side streets and alleys are still a slippery mess. I took the fixed gear out today for just a minute because I wanted to try it, but it was not good between the icy ruts and having no energy.
at 2:24 PM No comments: 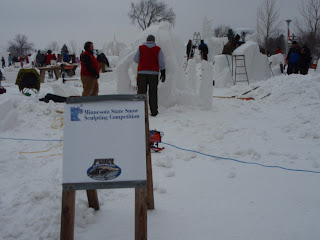 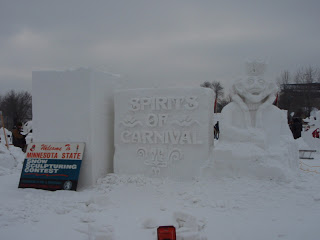 We ventured out the State Fair grounds to check out the State Snow Sculture Championships today. It turns out we were too early - the potential champions were still working on their creations. Nevertheless, we hung out and watched for awhile took some photos for you. It was interesting to see that most of the contestants had small clay scultures that were mock ups of the large scale piece that they were trying to create.
Popular tools for making big snow sculptures include:
- Curry combs
- Pruning saws
- Ice scrapers
- Hand trowels
- Cement floats
- Anything else they have in the truck bed
at 4:24 PM No comments: 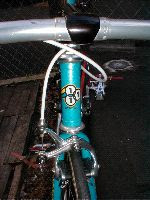 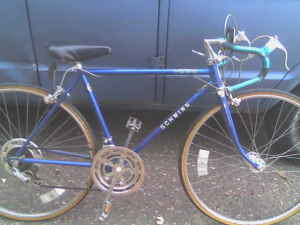 I don't care who you are or what you do for a living. No one... Not a single living person, has something interesting or insightful to say each and every day.
at 10:32 PM No comments:

The Big Red One

My Dad was a "Spec-4" in the Big Red One - the first infantry. Here is a bit of history about the First Infantry Division in honor of him:

The Division’s history begins in 1917 when General John “Blackjack” Pershing arrived in France with the First American Expeditionary Force. The “Fighting First” led the way for American troops in World War I. Names like Cantigny, Soissons, St. Mihiel and the Argonne Forest tell the story of the gallantry of the soldiers of the 1st Infantry Division, now wearing the famous “Big Red One” patch on their left shoulder.

During World War II, the 1st Infantry Division was the first to reach England, the first to fight the enemy in North Africa and Sicily, the first on the beaches of Normandy in D-Day and the first to capture a major German City – Aachen.

The D-Day landings on June 6, 1944 provided the supreme test. In five days, the division drove inland and cleared a beachhead for supplies and troops. Driving eastward across France against fanatical resistance, the soldiers of the 1st Infantry Division spent nearly six months in continuous action with the enemy.
After capturing Aachen, the 1st Infantry Division still faced months of bitter fighting at places like the Hürtgen Forest and the Battle of the Bulge. When the War ended, the Big Red One had rolled through Germany and into Czechoslovakia.

The 1st Infantry Division remained in Germany until 1955, first as occupation troops, then as partners with the new Germany in NATO, the North Atlantic Treaty Organization. In 1955, the Big Red One redeployed to Fort Riley Kansas.

In the summer of 1965, the Big Red One was the first division called to fight in Vietnam. For nearly five years, its soldiers battled the enemy while carrying out programs to aid the people of South Vietnam. In April 1970, the colors of the 1st Infantry Division returned to Fort Riley. Home again, the Big Red One became a dual based division with its 3 rd Brigade in West Germany.

Another first was credited to the Division when it embarked on the beginning of a long series of REFORGER (Return of Forces to Germany) exercises. These exercises demonstrated our nation’s determination and capability to defend, with our NATO allies, Western Europe.
On November 8, 1990, the 1st Infantry Division was alerted and over the next two months, deployed more than 12,000 soldiers and 7,000 pieces of equipment to Saudi Arabia in support of Operations Desert Shield/Storm. Another first, the Big Red One led the charge into Iraq. After spearheading the armored attack into Iraq, by February 27, 1991 the division broke the enemy’s defense along the Kuwait border and cut off the path of retreat for the fleeing Iraq Army.
During the next 100 hours, the Division raced across southern Iraq into Kuwait, engaging and destroying all or part of 11 enemy divisions. The Division fought its way through 260 kilometers of enemy-held territory, and destroyed more than 500 enemy tanks and 480 armored personnel carriers. In addition, the Division captured more than 11,400 enemy prisoners of war – twice as many as any other unit.

On April 10, 1996, the colors of the 1st Infantry Division moved to the German city of Würzburg. Shortly after their arrival, the Big Red One soldiers assumed peace enforcement responsibilities in Bosnia-Herzegovina in support of Operations Joint Endeavor/Guard. The Division deployed to the Balkans twice in 1999, first as part of Task Force Sabre in Macedonia, then in Kosovo with NATO’s Task Force Falcon on 10 June. This contingent patrolled the streets and countryside of Kosovo until June 2000, when it turned the mission over to the 1st Armored Division.
In November 2002, the 2ndBattalion, 63rd Armored Regiment joined NATO’s Task Force Falcon in support of Operation Joint Guardian for a peacekeeping mission in Kosovo. The 2nd Battalion, 63rd Armored Regiment enforced peace agreements in the Multi-National Brigade East Sector. The 2-63 helped create a more secure environment and assisted in transition to civilian control.

In January 2003, the division primed itself for Operation Iraqi Freedom. Big Red One soldiers formed Headquarters, Armed Forces-Turkey and prepared the way for the 4th Infantry Division to enter Iraq through Turkey. When the Turkish Government denied access through their border, ARFOR-T collapsed the lines of communication it had built and the 4th ID deployed to Iraq via Kuwait.

As part of the BRAC changes, the Division cased its colors in Germany July 7, 2006.
The 1st Inf. Div. conducted a transfer of authority with the 24th Inf. Div. on Aug. 1, 2006, assuming command and control of Fort Riley.

The 2nd Brigade Combat Team deployed from Germany in support of Operation Iraqi Freedom in 2006.

Due to changes in the war strategy, 1st Brigade assumed two new missions for the Army in 2006.

Mission 1: The 1st Brigade is charged with supporting the Army's Transition Team training mission where Brigade Soldiers train thousands of service members from across the Army, Air Force and Navy to become Iraqi and Afghan military advisors.

Mission 2: The 1st Brigade provided deployable security force elements that can move anywhere the Army wants them to be. Approximately 2,000 Soldiers from the brigade deployed fall 2006 as SECFOR companies.

The 4th Inf. Bde. Combat Team, which stood up Jan. 16, 2005, deployed from Fort Riley to the Middle East in support of Operation Iraqi Freedom in February 2007.
The Division's Combat Aviation Bde., which uncased its colors Aug. 1, 2006, and Sustainment Bde. (formerly known as DISCOM) are also on orders to deploy in 2007 in support of the Global War on Terrorism. 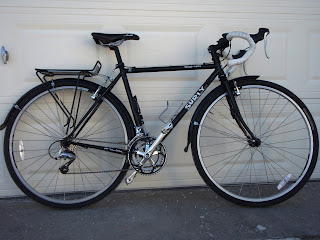 I braved the cold this weekend for another ride and to snap a picture of my Cross Check. I just got it back from Freewheel, where I had them move a triple chainwheel over from an older Allez that is currently on trainer duty in the basement. This ended up being a bigger project than I anticipated and was more wrenching than I wanted to take on given my current travel schedule and limited skills. Freewheel did a nice job with it and I am happy with the conversion so far. Unfortunately, you can't really see the triple unless you click on the photo. Also, note the pirate-style Jolly Roger on the top tube. These should be standard issue on all black bikes in my opinion. 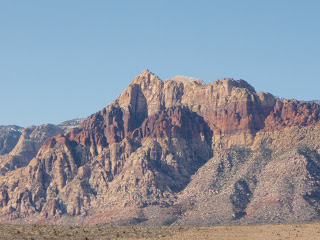 We went to Las Vegas for about 4 days this past week for some vacation and time away from work. We are not "Las Vegas" people and stayed at the Red Rock Casino on the edge of town, near the Red Rock National Recreation Area. Got lots of hiking in and thought about renting mountain bikes from Las Vegas Cyclery but we never got around to that. The scenery shot gives you a feel for the land scape north of Vegas.

On our last day we drove east to Lake Mead and Hoover Dam. That was odd. Hoover Dam might be an engineering wonder, but it looks like a bunch of power lines and substations in a giant gravel pit. It's also smaller than I pictured it - we drove across the dam in about a minute. People were walking around and taking the tour, shooting photos, etc. despite the fact that is was cold and windy. The second photo looks north toward Lake Mead from a parking lot at Hoover Dam. No photos of the actual dam, however. 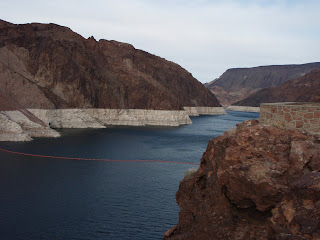 LOLCat of the Day 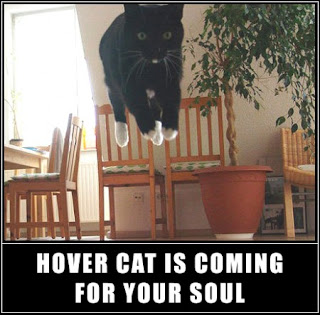 Other good LOLCats are available every Caturday at MPLS BIKELOVE http://mplsbikelove.com/forum/viewtopic.php?t=2959

Here is a fabulous gear inch calculator. I need to go count teeth and run this for my Cross Check now that I am running a triple on it. 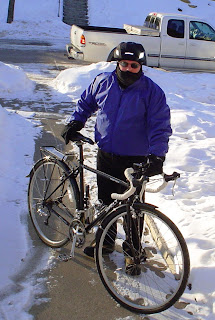 I am not much of a winter biker, but it was a balmy 1 degree and breezy today so I decided to go for a ride. I was actually a little too warm(!). I wore a fleece top and a wind proof shell and long johns under my jeans. Wool socks and some mid weight winter boots on the feet, and a combo hat and face mask (not a balaklava - believe it or not you can't find the damn things around here anymore due to the hockey tournament). The only real problem was that my mittens pretty much made it impossible to use the brakes - I had to Fred Flintsone it once but otherwise that no problem.
at 11:29 AM No comments:

Welcome to my blog! I will be posting things that interest me (and hopefully others) here going forward. Topics will include bicycling, energy and energy policy, ice fishing and other eclectic topics. Enjoy!
at 11:29 AM No comments: