Met at 1:30 today at the north side of the Stone Arch Bridge for a memorial ride and Ghost Bike installation for Ed Gorecki, a 51 year old Minneapolis man who was killed by a drunk driver in December on Quincy and Broadway in Northeast Minneapolis. 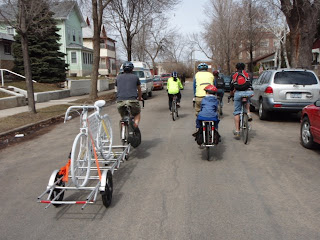 About 25 people turned out, mostly Bike Lovers. It was a beautiful day for a somber ride. We rode very slowly (about 6 mph) from the Stone Arch bridge north and west to the site of the accident. The procession was very effective - a large group of people on bikes gets peoples attention, and it is impossible to miss the Ghost Bike on the trailer in the middle of the group. 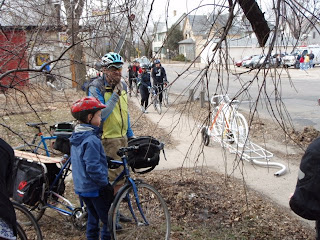 Here is a map showing the location of this installation in case anyone wants to see it for themselves: http://www.gmap-pedometer.com/?r=1743610 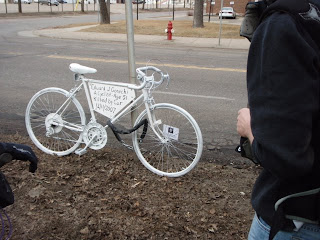 Quote of the Week

"My favorite toast is rye toast."

Sick. Upper respiratory crap has descended upon me and I am home from work today, trying to beat this before I have to go up to Anchorage on Sunday. Mostly nasty coughs and fatigue so far...

A co-worker brightened my day by sending this video of a wind turbine self destructing after the brake mechanism failed on it (God bless my co-workers!). Since I did nothing else but read and sleep today, I thought I would share this with everyone.

My Promise to You 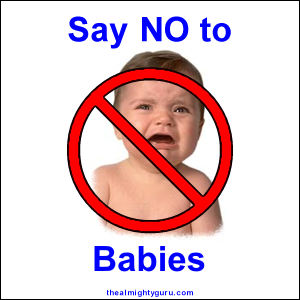 I promise that I will not post photos of babys doing cute things on this site. Ever.
at 8:48 PM No comments:

Richard Burke, the founder of Trek Bicycles, passed away this week. Trek had a big following, and was a very big deal in my ancesteral homeland of Wisconsin, when I was coming of age. I have never owned (let alone ridden) a Trek (although I do own a LeMond, which is now Trek-owned). I doubt very much that I would buy a new Trek, but I watch Craig's List almost every day for an old steel Trek. I would buy and ride it more for the history than because I need another bike.
Burke was not much of bike rider. Many of the big names in bikes are former racers, but Burke never rode much as far as I can tell, although he ran in several marathons. Some bike lovers object that he was too much about the business and not about the passion, but he hired passionate people and let them do their thing, and it was good.

I particularly like the old school graphics and the look of the bikes, and I am very curious what they ride like. The head badge shot is from a 1978 Trek, and the rear wheel/triangle if from a hot 1983 road bike. 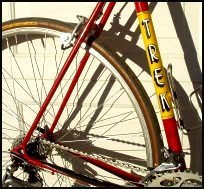 Here is the teaser and a link to an article in Inc. on Burke and the History of Trek:

By: Richard Burke
As told to Leigh Buchanan

The first Trek bikes, manufactured 30 years ago in a barn in Waterloo, Wisconsin, were cult items, appealing to purists who would no more ride their fathers' Schwinns than drive their fathers' Oldsmobiles. But Trek had no brand strategy or money to advertise, and in the early years it wobbled badly. Richard Burke turned things around by positioning the company to ride the rising interest in competitive cycling. Today Trek--still in Waterloo, now employing 1,727 people worldwide and producing annual revenue of $600 million--is the largest bicycle company in the United States and the second largest in the world. The company is famous for its carbon fiber frames and really, really famous for making the bikes Lance Armstrong pedaled to seven victories in the Tour de France. Burke, 71, is chairman of the board and Trek's majority shareholder. His son John became CEO in 1998. 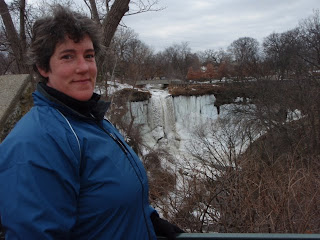 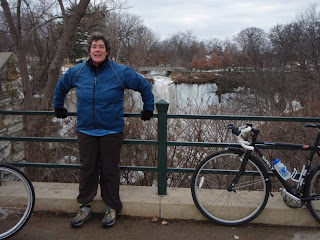 Some pics from today's ride to the U of M. We stopped at Minnehaha Park to check out the waterfall on the way back home. Molly looks fresh and lovely after 16 miles on her new Breezer Uptown.
I look like Mr. Potato Head after the same distance on my Cross Check. 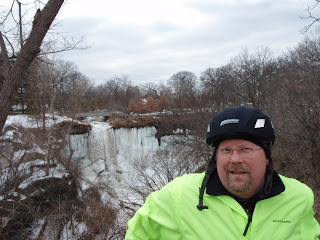 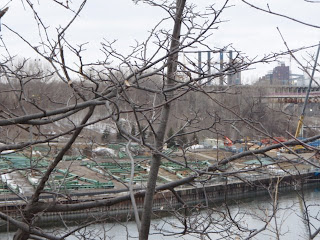 After the I-35W bridge collapsed on Aug. 1, 2007, the NTSB and MNDOT took over Bohemian Flats, a low area on the west bank of the Mississippi River just downstream from the U of M and the bridge, to lay out the peices of the bridge and do the forensic work on what caused it to come down. 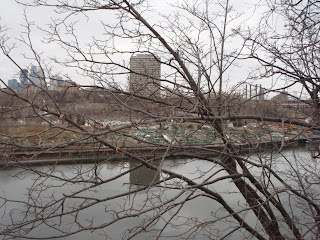 Molly and I rode up there today to get a few pictures since the snow is now melting. I wish these had turned out better, but it's what I've got. 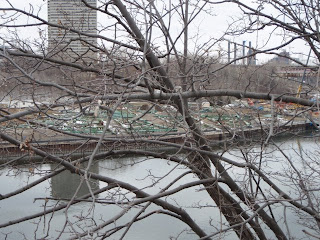 The amount of wreckage is very impressive. We crossed the Mississippi on the Franklin Ave. bridge and rode up the St. Paul side so we could look down and across the river at the scene. The West River Road is still closed north of Franklin Ave., and will be until the replace-ment bridge is complete, but you can get close enough on the south end of the work site to see the twisted beams. 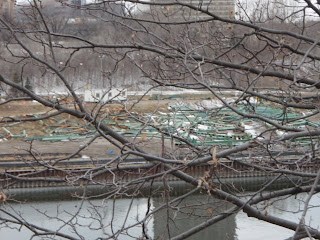 It ended up being a slightly chilly 17.5 mile ride, but Molly got a new bike today so it was a fine day for its maiden voyage.
at 8:57 PM No comments:

As Strong as Steel 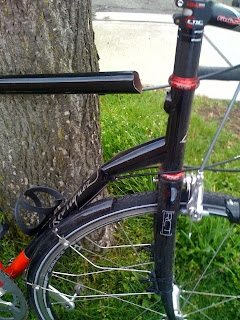 This catastrophic failure occured to non-lugged steel frame at a relatively low speed. The accident occured at about 12 mph when the rider (not me) was T-boned by another byker that ran the stop sign/light as he was pulling away from an intersection. What's interesting to me is that this amount of destruction was done by another bike and rider, and no car or or other large mass was involved.

The frame is (was) a Rodriguez and was probably a lightweight frame. The fact that the top tube failed right near the top tube weld is interesting and makes me wonder if the weld got too hot or the frame had been stressed somehow, but even so, the down tube totally collapsed and the wheel is pushed back about 4 inches. I am surprised at how this nice bike folded right up after after right-cross accident.

I still like steel over CF, but watch out at intersections...
at 7:23 PM No comments:

How Attentive Are You?

Find out! Quick and easy. And possibly eye-opening. 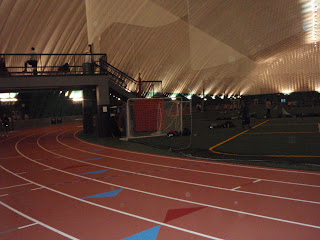 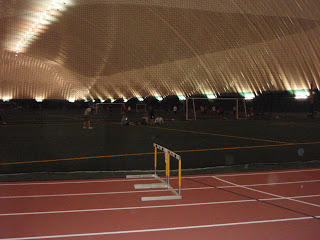 The large track and field facility next to the Change Point mega church in Anchorage has opened. This facility started life as a publicly subsidized seafood processing plant that went out of business after a year or two and was empty the entire time we lived in Anchorage. Change Point, a very large non-dominational Christian church bought the facility to give itself a home and then put a very large sports field and track door as well. This was much-needed in ANC; we had only one decent in-door track (Tesoro) and this has more room and better facilities.
Here is a link about the facility from the NY Times if you want more: http://www.nytimes.com/2007/11/23/business/23megachurch.html
at 10:00 PM No comments: 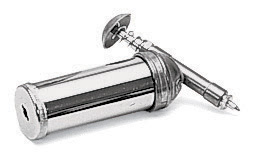 Long travel day coming back from Anchorage, but when I got home we hit Pepito's for some tasty margs and food, then hung out at the house the rest of the evening. A nice surprise awaited my arrival: a new Snap-On grease gun. I had the chance to use one of these at Hiawatha during the overhaul class last weekend and really enjoyed the tool, so I went on line and scored one for myself.
You can too if you click on the photo.
It was not expensive even though it's a Snap-On and will probably last the rest of my life time, so I should be all set in that department. It's small (3 oz. capacity) and the nipple is small enough to get into a hub, and you can load it with anything you like (Phil, Park, White Lithium, etc.).
at 10:32 PM No comments:

I've spent the entire week in Anchorage again and have been covered up with work but am heading home tomorrow morning. I will put up some photos of the new indoor sports complex built at the Change Point chuch site in Anchorage - the facility is very impressive and a nice addition to Los Anchorage. Stay tuned...
at 6:43 PM No comments:

There is an on-line petition to try and persuade Google Maps to add a "bike there" option to the mapping. The petition is available on-line at http://www.petitiononline.com/bikether/petition.html

The text of the petion reads as follows:

To: Google, and the Google Maps team
We would like a 'Bike There' feature added to Google Maps - to go with the current 'Drive There' and 'Take Public Transit' options.

The feature would take into account actual bicycle lanes from the locality being mapped, and it would automatically plan a route for a bicyclist, possibly even providing the cyclist options for either the most direct route, or the most bicycle-friendly (safest) route. The Google Maps-based third party site, byCycle.org (http://byCycle.org/), provides these features for two metro areas - Portland, Oregon and Madison, Wisconsin, and there are countless other mapping initiatives around the world aimed at accomplishing the same goal. We hope that Google will consider building this feature into the core Google Maps service.

There are many reasons why this feature would be a wonderful edition to Google Maps. Among them, some of the most influential would be to:
* Make bicycling safer for millions of bicyclists around the world.
* Empower world citizens to better adapt their lifestyles to face the challenges of global climate change.
* Help Google realize its core mission of 'organizing the world's information and making it universally accessible and useful.'

By implementing the 'Take Public Transit' option, Google and the Google Maps team have shown themselves to be concerned and capable world citizens; a 'Bike There' feature addition to Google Maps would be the ultimate statement in support of sustainable development.

For more information on this feature request please visit the Google Maps 'Bike There' website (http://GoogleMapsBikeThere.org/).

Thank you, Google and the Google Maps team! And thank you, petitioners, for joining us in attempting to realize this very important goal!
Sincerely,

The Undersigned
at 6:50 PM No comments:

Welcome to Minneapolis - Have Some Coffee! 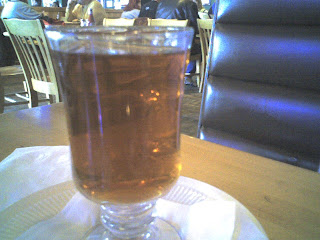 Today we discovered the world's worst coffee right here in Minneapolis. This vile tincture was presented to us at "Tailgator's" a run-of-the-mill sports bar on Nicollet Avenue just north of the Cross Town today. This coffee was far weaker than any I have had (and due to extensive work-related travel to places like Bemidji, Grand Forks, Thief River Falls, and other out-of-the-way population centers of the rural Midwest, I have sampled much bad coffee).
To add insult to injury, Tailgator's serves their tepid brew in clear glass mug, to defiantly show you how unblinkingly weak it truely is.
at 6:55 AM No comments: 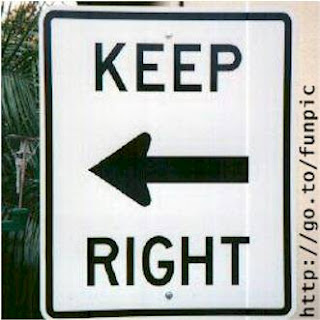 The Minoura truing stand has been sold to a Bike Lover who shall remain nameless to protect their identity. I have an all-morning class on overhauls at Hiawatha Cycles this morning and some in-law action later today, then it's off to Anchorage again for another week.
I see Park Tools is selling prety nice shop shirts on the website at http://www.parktool.com/parktoolgear/detail.asp?cat=63&item=MS%2D1
Bike Lover Jimn has developed a snarky Google "mapplet" to point us to MPLS bike trails and decent roads. He posted that on MBL earlier this week and I love it (see the Route Planning forum for the full discussion). Based on the MBL chatter, I expect it will grow and only get better. Check it out here: http://maps.google.com/ig/add?synd=mpl&pid=mpl&moduleurl=http://mnbikemaps.googlepages.com/tcbikemapplet.xml
This will make it over to links as well to keep it available. Thank you Jimn!
That's it; gotta go. Keep Right!!
at 6:55 AM No comments: