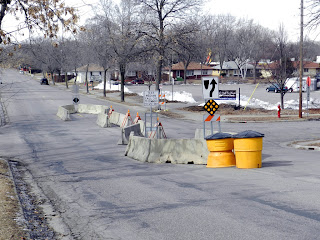 A bike infrastructure project that I am interested in is moving forward, it seems. The Southern Connector would provide a bike route on 17th Ave. from Minnehaha Parkway all the way to north of the Midtown Greenway. Eventually, this route would also tie in to the planned Intercity Bike Route as well, but that project is a ways down the road at this point.

I have posted several times about the Southern Connector project and provided comments during a field review of the route. I am interested in this one because we really do need a north-south route alternative to Park Ave./Portland Ave. on the east side of I-35W. 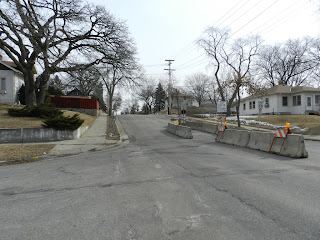 Recently, I noticed an experimental median on 42nd Street at 17th Ave. That crossing is probably the most dangerous on the Southern Connector route. We used to live blocks from this intersection, and often had trouble crossing this street because cars travel too fast on 42nd Street in general, and as the second photo shows, the sight lines from 17th Ave. are terrible due to a hill immediately east of that intersection that obstructs cyclist and pedestrian views of traffic heading west on 42nd Street.

During the route reconnaissance ride during the planning phase of the project, there was discussion of traffic calming and potentially a median at the intersection of 17th Ave. So. and 42nd Street to provide shelter for pedestrians crossing the busy 42nd Street.

With the temporary median in, I was curious to see it's effect on traffic, and if it was in fact slowing vehicles down to make this crossing safer for bikes and pedestrians. My quick reconnaissance this morning leads me to believe that this is working. I shot a short video of the intersection - you can see the cars building up speed as the leave the Cedar Ave. intersection but then brake and slow as they see the median.


Yes - the temporary median is ugly, but the final version will be much better looking. I think this will be a good improvement for the neighborhood and hope that the median becomes permanent at this location - that would make the crossing of this street a lot safer. Call 311 and let them know the median is an improvement if you agree.
at 4:09 PM