Syracuse and Fear of Cycling 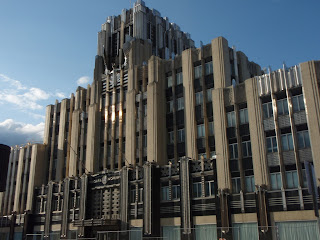 I am back from a mid-week trip to Syracuse, where we have a small office focused on electric utility work. Syracuse is an interesting city; it has some wonderful old buildings and history (Erie canal, the Iroquois Nation, etc.). The photo above is the Niagara Mohawk Power Company building. Mohawk has now been snapped up by National Grid (as were many other companies) but the building remains known as the Mohawk building. It's one of the most impressive examples of Art Deco I have ever seen. Syracuse does show signs of the grit and decay common in other northeaster cities, and they aren't much for maintenance (sidewalks and medians are weedy, cross walks unpainted, etc.), but it's definitely worth a stop. 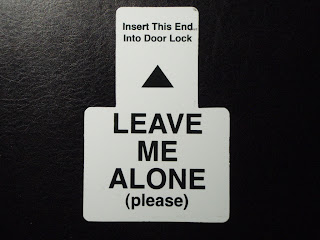 I stayed at the Jefferson-Clinton Hotel in Armory Square. It's an historic district with a lot of preserved buildings that have been re-habbed into restaurants and bars, mixed in with some aging retail places. The hotel was nice; good rooms and a good location, but my favorite part was the "do not disturb" signs. The devil on my shoulder was strongly suggesting that I swipe my DND sign, punch a hole in it, and attach it to my photo-I.D. badge for work. But I resisted this temptation and left it for the next guest to enjoy. 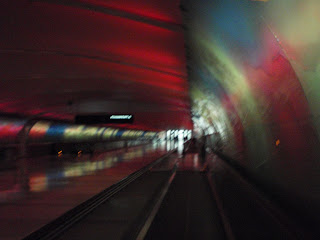 The only real challenge for this trip was due to the fact that no one flies direct to Syracuse; it's a second tier city served only by feeder airlines, so that means connections through Detroit for me. I used to spend tons of time in Detroit early in my career, and have seen the Detroit Metro airport grow to its current size for almost 20 years. They now have a long, dark weirdly lit tunnel that plays spooky music which you have to pass through to get from Concourse C to Concourse A or B. I don't know what the architects were trying to achieve with this, but if they were going for "near-death experience (with your luggage)" they were successful.
On an entirely unrelated note, I came across this interesting series of articles on fear and cycling by a Sociologist named David Horton. Someone posted a link on MBL about the articles and that's how I came across this. The helmet article is interesting - helmet campaigns very blatantly send the message that cycling is dangerous, and there's a political correct aspect to helmets that seems way out of proportion. But that said, I almost never ride without one, either. So far, it's been quite good. I may well add a link to this on the right.
CSA Harvest Fest today followed by a relaxed Sunday. This promises to be the last good weekend of the summer, so get out there and enjoy it!
at 8:12 AM