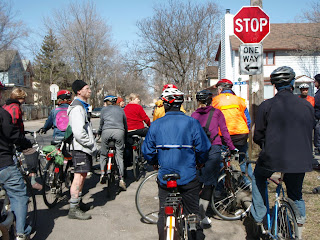 After lots of effort, considerable thought and reflection, admittedly some frustration, and futther deliberation, I am throwing in the towel on bike advocacy. At least in any kind of leadership capacity - I might still get in on a protest ride or badger some store for better parking, but otherwise I am hanging it up.

I've been actively engaged in a number of efforts, including


None of these have been particularly rewarding but there are some results to report:
Additionally, I've tried to get into a few other areas but never gotten traction. These include:

My outsider's perception is that BAM is pretty ossified and those seats are... established. The MPLS Bike Advisory Committee had "openings", but they weren't actually all that open - I applied for a ward position, but lost out to a person that has been on this committee for a long time and means to stay that way. The MBC is actively looking for volunteers but the organizational/leadership structure doesn't work for me and I don't see much growth there. That being said, I firmly believe that MBC does good work and I support them in word and deed. I just don't want to be part of their scene.

Here's what I have concluded.

Living in a really strong Bike City is great for a lot of reasons - we have a lot of good bike amenities (which benefit local residents and pedestrians - not just cyclists), we have a lot of very talented and dedicated people that are working to improve those amenities as well. Additionally, we have  base of motivated people willing to volunteer a little time and effort to move things along for those organizations.

What that means, though, is that this particular pond is pretty crowded. It's like trying to get into Science Club at MIT or something. Good luck, Chuck.

Therefore, if one wants to make a difference, it would be economically rational to focus on some other under-served area and not pile-on with the over-served issues (such as bike advocacy). I'll still support MBC projects that make sense, keep active with cycling education by exercising my LCI credential and make a stink with the City when it matters, but otherwise the general cycling advocacy is getting shoved to the back-burning for the foreseeable future.
at 10:43 PM