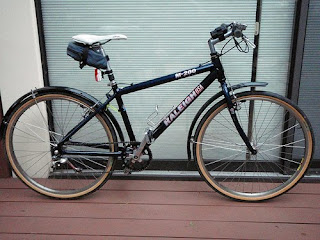 I am trying a new experiment in the bike arena. A neighborhood garage sale brought me what I think is an early 1990's Raleigh USA M-200 (in pretty good shape) for a mere $60. I originally bought this thinking I would probably pass it on to a co-worker or a Bike Lover looking a decent small framed bike.

As I mulled over the possibilities, I realized that my "bad weather" bike, the Old-But-Nice-Marin was a little too nice to ride in foul weather and the beautiful steel frame was already showing a little effect from the salt last winter. This frame is aluminum and the cassette had been converted to a single-speed already (with a Shimano derailleur serving as a chain tensioner). 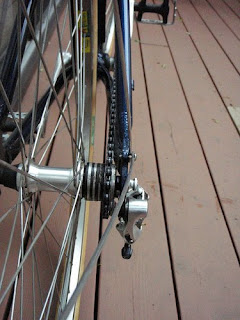 Adding some fenders, moving over some lights from the Marin, and swapping out the marshmallow saddle for a spare ass-hatchet that I had laying around essentially completed this build. It needed some general tightening, tensioning, truing and lube, but that really only took an hour or so last weekend.

This bike will not turn any heads, that's for sure. But, I rode it around the neighborhood tonight and found the gearing to be suitable for my topography and the ride... the ride is fine. Single speed will be a new experience for me; I generally like to face the world with gears, but I know my commute and myself and think I won't have any trouble going single speed.

Now I am hoping it's raining pitchforks and hammer handles tomorrow morning so I can take this thing through the paces.
at 7:54 PM