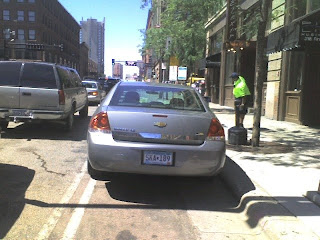 At lunch I walked over to the Warehouse district, pausing to take this picture of a car parked in the bike lane on 1st Ave. What makes this even richer is that this vehicle (MN# SKA-189) had a laminated sheet on the dashboard saying something like "City of Minneapolis - Official Police Business". I badgered the Downtown Improvement District guy in the bright yellow shirt to call traffic control and have this vehicle towed just to see what he would do.  He acted real concerned, but the car was still there on my way back from lunch. 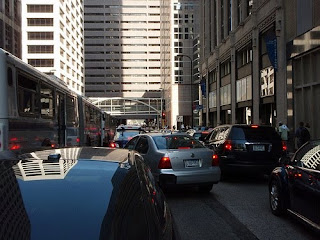 The next photo is from my ride home tonight (or rather, my ride to class). This photo is taken from the middle of 6th street approaching 3rd Ave from the northwest. This is a heavy traffic area in general, and it was made worse tonight due to a Twins home game ending during rush hour. The right-most lane, where most people would naturally ride there bikes, is in fact a right-turn-only lane. The second lane is a right-turn or straight lane. To correctly and safely ride through this intersection, bikes have to move into the second lane so they don't get a left-cross. Although I do this maneuver a lot, it stills takes some confidence to wade out there and dance with the cars. That said, I really kind of enjoy the high traffic riding downtown. 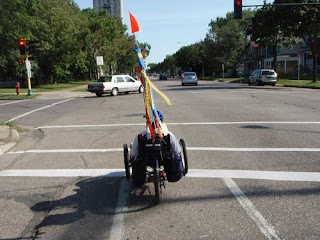 The last photo from today is my old nemesis, the Catriker. I see this woman fairly regularly, especially if I leave for work a little late or head home a little early (she must work a slightly shorter day than I do). She is... shall we say... hard to miss. She rides a Catrike recumbant with at least one flag flying - sometimes it's the diversity rainbow, sometimes a Norwegian flag, sometimes more than that.

She used to drive me absolutely ape-shit because her bike takes up the whole lane, she goes about 10 mph and usually she's talking on her cell phone as she rides. I have this tendency to be a hammer-head on the way home, so I am trying to cure that and slow down and enjoy the ride this summer. It must be working because I actually smiled when I saw her today. I am not entirely recovered, however, because I caught up to her at an intersection and when the light changed, I dropped her like a bad habit.
at 9:46 PM