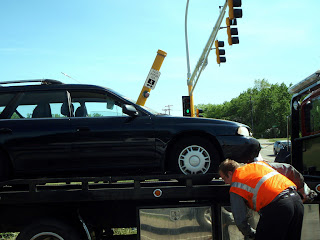 Last summer when I was driving back from my parents house in Wisconsin on a hot Sunday afternoon, I happened upon a car accident that was in the process of being cleaned up. The crash happened at the intersection of Delaware Street and Highway 110 in Invergrove Heights or Eagan or whatever. It was hard to tell exactly what transpired, but one thing was readily apparent - a little station wagon had one of those "press to walk" poles speared right through the window and dash board.

How does that even happen? Those poles are attached to the ground very well, but it must have been sheared off by another vehicle and flown through the air end over end, hitting the station wagon just right and with enough force to impale the car like an  hors d oeuvre. I can only imagine what the driver of the station thought (an extreme variety of "WTF" no doubt) when s/he collected their senses after this incident. If I didn't get the photo, I would not expect anyone to actually believe this story, but there it is for your consideration.

I have been reflecting on wake-up calls/revelations/epiphanies/life changing moments and was reminded of this photo, so I dug back in the Flickr pile and pulled this out. If getting your car speared by a pole on a clear sunny afternoon is not a wake-up call, I don't know what is.

I personally know at least two people that have had personal wake up calls; one involved a lightning bolt that hit a tree near where they were standing; the other was a more routine but very effective health scare. I've had one of these myself (sort of). I was flying in a small plane coming back from an administrative hearing in rural North Dakota when we had to take emergency evasive action to avoid another plane over the western suburbs of Minneapolis. Although I am generally a nervous flyer, the whole expereince (steep dive, hard turn to the north, another climb and then re-routed over Wisconsin) was strangely serene and beautiful, that's how I know it was a "close call".

I suppose if anyone lives long enough, it's inevitable that they get a wake-up call at some point. Unfortunately, I also suspect that most revelations are not bolts of lighting that are over in an instant, but instead are long, slow drawn-out processes of self discovery fueled by vague dis-satisfaction, frustration, a feeling of stagnation, or maybe even failure.

The trick here is discernment, and recognizing personal challenges and unhappiness as a means to finding what's wrong and setting it right rather than as an end in itself (i.e. one's destiny). It would be so much easier for most people if they could just buy a life-changing experience at the mall, but that's not an option yet.