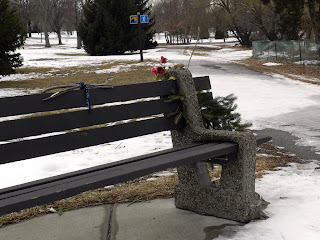 The Star Trib ran an article a few weeks ago about an event that originally happened back in November. The day before Thanksgiving, an elderly man that was found unresponsive on a park bench at Lake Nokomis. Passers-by called an ambulance, but the man had died alone on the bench, sitting upright, starting at the lake and the Minneapolis Skyline. There was no identification on the body, the story never made the paper, and who the man was remained a mystery. 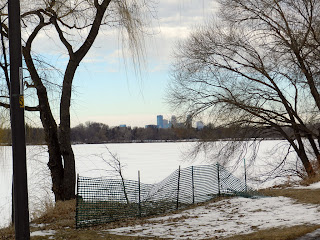 Now, the elderly man has been identified. Walkers at Lake Nokomis have also installed a small memorial on the bench where this man took in his last view of the Lake and the skyline. The strib article provides a sort of obituary and a little eulogy that he never got back at Thanksgiving, and the memorial serves a reminder to those that pass by on their daily walks.

I've always been fascinated with these types of memorials, and pass several on a weekly basis. Each one commemorates a life, but make no mistake - they are for the living more than the dead. Often people with no connection whatsoever to the deceased will leave a memento at the shrine, moved to do so by something that brings the deceased closer. Shared experience, appreciation of the same location, proximity, or maybe some other more personal reason that I could not begin to speculate on. 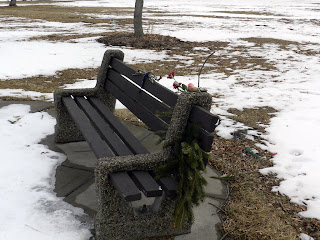 In this case, the deceased, John Scherer, was a stranger to almost everyone. Some recognized him, but none really knew him. That's what makes this memorial all the more touching. The massive public displays of grief at impromptu memorials for celebrities or classmates somehow seem less sincere to me than these small memorials erected for unknown people.

Eventually weather and/or the Park and Rec department will clear this memorial away, but I wanted to capture it before it was gone as a lasting, digital memorial to John Scherer. Hopefully, we'll get a plaque on the bench or something more permanent.