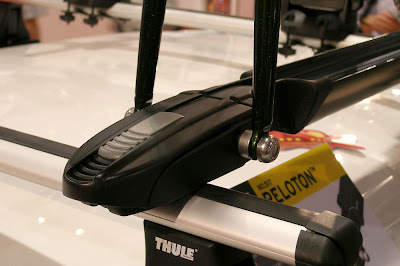 We bought a new roof rack for the car a couple of weeks ago to replace the two Yakima trays that we had. These units supposedly attached to the existing factory rails on the Subaru, but they were very wobbly, held the bikes at a scary angle and generally made me feel like I would soon be replacing anything I put up there.

That was not acceptable, so I ended up dropping more than I wanted to on a Thule rail kit and two "Peloton" trays. I finally got around to assembling the thing this morning and I have to say that the fit and finish, and the installation was far superior to the Yakima kit. The Thule is up there like it was welded to the car, the bikes are perfectly straight (not leaning or wobbling) and the fork attachment mechanism locks and is clever as hell. A big improvement for us.