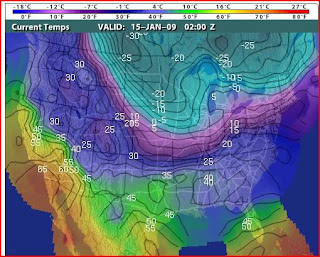 It seems we are heading into the coldest night of the year in more ways than one.
An icy blast has hit the Twin Towns pretty hard this week - it's been cold and a little breezy, and we've had a couple of snow storms that have tied downtown Minneapolis up in knots. Between the black ice and doughy snow on top of it, everybody pretty much moves at about 10 miles per hour.
The economy continues to suck, and the flu has moved to the energy sector as well banking, housing and everything else, it seems.  I got a new Energy Letter in my email today and here's a short but relevant passage:

"I see the nascent breakdown in the GDP/oil relationship over the past three years as a symptom of the supply shock the world has been experiencing. In past economic cycles, faster GDP growth powered higher oil demand and rising crude prices; higher oil, in turn, catalyzed increased drilling activity and growth in global oil supply. Those rising supplies helped keep a lid on crude oil prices.

In this cycle, however, supply growth was limited by geological factors; many of the world’s largest oilfields are mature and seeing declining production, while new fields are difficult, expensive and time-consuming to develop. Thus, even with oil prices sky-high and energy firms investing record sums in exploration and development, global oil supply rose only slightly between 2005 and 2007. Non-OPEC production growth has, in particular, serially come in under expectations.

This situation is soon to get worse, much worse. Global GDP growth has clearly slumped this year and will remain weak for at least the first half of 2009--the epicenter of the slump will remain the developed world."
Great.
Energy Letter is good, by the way. Anyone interested in this issue would probably enjoy subscribing, even though they send stuff like this to in-box regularly.
What can you do?  I met a friend at Common Roots for a few beers and some tasty food tonight to put the day-to-day problems behind me. It was great to get caught up and swap stories and just generally the economy and the weather aside for a bit.
That's it - stay warm and watch out for the ice!
at 8:50 PM