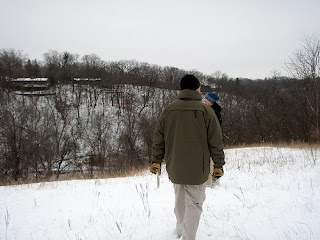 This post marks yet another year I helped out with the Christmas Bird Count (CBC). I don't know how many of these I have done - maybe a dozen or so. When I started we had an area in Farmington near the refinery. After that we had an area in Eagan that included Lebanon Hills park. For the last three years (since I have been back from CT and AK) our area has been in southern Bloomington, and includes Nine Mile Creek park. 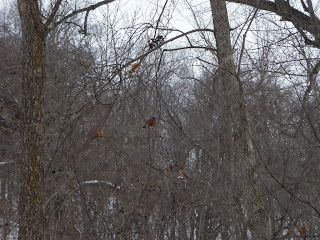 The Nine Mile Creek location has been surprisingly good. We have located Barred owls the previous two years (not this year, though) and we have a flock over-wintering Robins that only seems to get larger each year. This year we were treated to over 100 Robins. Nine Mile is also an awesome location for Red-bellied woodpeckers; this year we had 15 of them, which is a record for us at this location during the CBC. 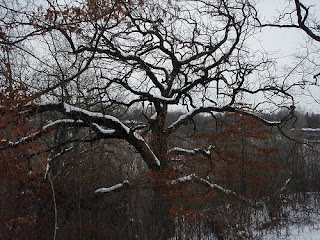 One blessing was that it was 20 degrees and still today. Two years ago it was about -10 degrees out and last year we had heavy, heavy snow. Both make for slow birding. The warm weather was appreciated by birds and birders alike, and while we didn't see any "good" birds, we did see a lot of birds. Mobs of chickadees, swarms of robins and plenty of Mallards, woodpeckers and Goldfinches greeted us.
A little CBC history: prior to the turn of the century, there was a tradition in some locales of a "side hunt". People would divide up into teams, and venture afield with shotguns; the team that came back with the biggest pile of dead birds was the winner. Yea!! Ornithologist Frank Chapman, an early officer of the Audubon Society, proposed a new holiday tradition that would count birds without killing them. The first CBC was held on Christmas Day in 1900. They got 25 species, which is 6 better than we did today.
I'll post the day's tally once I get it, but it amounted 19 species as I recall. Like I said, nothing to write home about, but a good day afield.
at 6:25 PM