Who's In Charge Here? 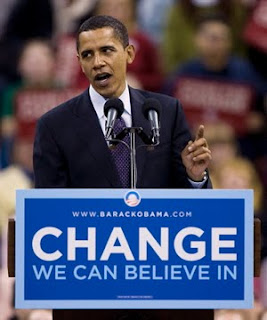 I read a thought-provoking post on Quince Urban Homestead tonight comparing our current state of affairs to 1776. I feel that this post is indicative of a growing sense of disillusionment resulting from the fact that despite the triumphant ascension of the Obama administration to the White House, it pretty much seems like status quo around here. We're still at war, still running up the deficit, still sending money to publicly held corporations (and now putting shareholder risk on the shoulders of the nation in the process), and still underfunding education, libraries and social services.
While it's tempting to say that we've been cheated and quip that the ubiquitous Shepard Fairey image had a typo and "Hope" should have an "N" instead of an "H", I think something is afoot that is more alarming than being misled by yet another politician.
I submit that we have allowed ourselves to become a nation that is run not "by and for the people", but rather by and for special interest groups. It seems like politics has become not so much about representing the Will of the People as it is the platform (or the battleground) for special interest groups to influence public policy to suit their agenda. Pick an issue - Israel, global warming, education, immigration, ethanol and wind power; you name it, and special interest groups are at work monitoring legislation and seeking "access" to sell their agendas to our elected officials.
About the only solution I can think of at the moment is to start a massive lobbying campaign to give the average people a voice in Washington. We'd have to have good old fashion caucuses or something to come up with a platform, but if we could get enough members, we could aggregate our votes and potentially gain influence, or at least have a voice in the debates. Otherwise a tea party might be in order here in the not-too-distant future.
at 9:48 PM