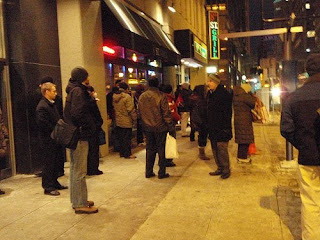 We are on Day 2 of the new transit nervana promised by the completion of the Marq2 Project. The Marq2 project was a down-to-the-dirt reconfiguration of Marquette and 2nd Ave. in downtown Minneapolis. Previously, we had two north-bound car lanes on Marquette and one south-bound bus lane plus a nicely sized south-bound (counterflow) bike lane. We had the same, in mirror image, on 2nd Ave.
The Marq2 conversion gives us two north-bound car lanes, two southbound bus lanes and NO bike lane. I've bitched about that at length on this blog, ranted to Transit for Livable Communities (who seemed like they could care less) and otherwise shouted into the wind on this issue with no effect, so that's what we've got.
The concept for Marq2 is to move the express buses (mostly to the 'burbs but there are a few MPLS limited service routes that also get to use Marq2) north on 2nd and south on Marquette and get them out of the downtown quickly. Good idea in principle. The Marq2 project included real-time bus schedule screens and heated shelters (neither of which are installed yet, but that's a minor detail) and stops labeled "A", "B", "C" and "D". Buses leapfrog around each other, picking up passengers at every other stop or so and passing waiting buses in the new second lane.
It's been cold and life has been difficult these past few days, so I have retreated to transit for my commute lately. One route option for my commute is the 133, which gets to use the new Marq2 facilities, so I gave it a go last night and today. On the first ride from downtown, the bus was about 15 minutes late. Tonight we improved that by 5 minutes, so I boarded only 10 minutes late and got home about 15 minutes later than scheduled. I can see that the second lane makes a difference in moving through downtown, but I am still smarting from the loss of the bike lane. I think bikes could easily share the southbound lanes with buses on Marquette and the northbound lanes on 2nd and may claim it, but there are cops mid-block directing traffic that will ticket scofflaws, so I'll be doing this selectively.
I will be curious to see if the buses are on schedule by the end of the week (good thing we had the street closed off for a month fur bus "training" prior to opening the streets to transit, no?) and when the bus schedule boards and heated shelters get installed. Hopefully that won't be a "next spring" project.
at 6:26 PM