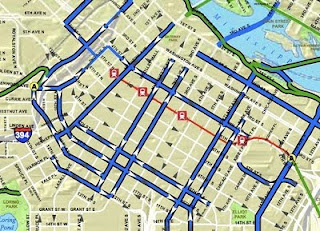 A positive outcome from the I-35W bridge collapse is coming to our downtown! See the press release below for the details:

The City of Minneapolis will receive $2.3 million in federal funding to restore the streets.

The detour roads sustained extra wear and tear during the 13 months the new 35W Bridge was being built.

The second open house is Wednesday, April 21 from 5 p.m. - 7 p.m. at the Doty Library Board Room in Central Library, 200 Nicollet Mall

Many thanks to the people of Minneapolis Bike Coalition and the City for seeing an opportunity to improve our downtown bike infrastructure. This will be a significant improvement over our current state of affairs downtown.
at 6:54 AM