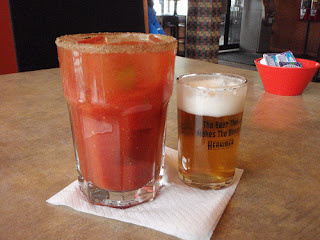 I have opined before that riding a bike in winter requires that a person be able to deal with three things: coldness, darkness and lack of motivation. I have the gear to deal with cold just fine, and I have a great light set up as well. I have been lacking somewhat in the motivation department this winter, however.

I found that motivation at 10:00 AM on Sunday morning. A relatively short, but fun ride to a local establishment for a Bloody Mary brunch with friends was just what I needed to get back on the bike.

The temps were cold - it was about 4 degrees and the wind chill was just slightly below zero, but with the right clothing I was just fine. Wool socks, winter boots, long johns under some cargo pants, a Smartwool top under a fleece top under a windproof shell, topped off by some P.I. lobster claw gloves and a beanie under my snowboard helmet kept me comfy as could be.

What sucked was the cookie dough snow on top of hard pack in all the side streets. Very squirmy and hard to ride on at any speed. Studded tires are kind of useless in cookie dough snow. I found I was better off riding in the broken up stuff because the cookie dough that looked firm was in fact loosely held together and would shatter under the treads of my tires, leading to small but exciting detours to the left and right to punctuate my otherwise forward progress. These little snows we've gotten lately have not helped conditions - they don't plow, so the cookie dough snow just piles up.

Only had to put a foot down twice on the way there, and not at all on the way back (either my winter skills returned or the Bloodies helped). Hopefully I'll be able to find some motivation to ride to work this week as well, although sadly I won't have tasty adult beverages and good friends waiting for me on the other end of that trip.
at 8:24 PM