I am a Bike Revolution Guinea Pig I replied to a post on Bike Love about a week ago and got to be a test pilot as a result. Beau at Penn Cycle received a few sets of Bike Revolution stickers from the company and offered them to the cycling community to test them out.

Penn has deservedly earned a bit of a reputation for helping Twin Cities cyclists recover their stolen bikes. I am aware of several episodes were stolen bikes were brought in to Penn or seen in the neighborhood and ended up getting returned to their owners because the folks at Penn follow the missing bike posts on CL and Bike Love and maintain a constant vigilance. This good karma resulted in Bike Revolution contacting Penn to see if they wanted to carry the I.D. tags, I suspect.

Bike Revolution is an on-line registry service for your bike (and Krypto locks, too). The Bike Revolution kit comes with 3 stickers with identical Pulse barcodes and numeric codes on each sticker. The large sticker is the "deterrent" and should be placed visibly on the bike (I stuck mine on the top tube). The other two are smaller and can be hidden somewhere else on the bike or kept for files, I suppose. 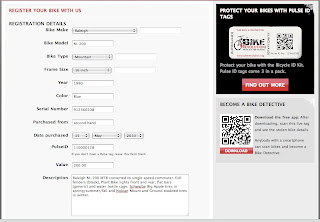 The on-line registration was easy and straightforward, but you will need your bike's serial number to complete the process, obviously. I chose to register my Raleigh single speed commuter because that seems like the mostly bike to get stolen, since I lock that up all over the place. The registration page has a box to describe the bike, so certain details, like the fact this bike is singled and has generic flat bars, can be added to the basic facts such as make, model, size and color. I also registered one of my Kryptonite locks while I was at it. 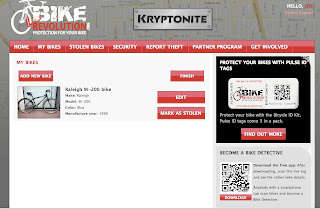 Once the registration is complete you are taken to a "My Bikes" page. You get a unique user name and pass word on the site when you register, so if you have say, half a dozen bikes, and you bought 6 of the I.D. tags, you could register them all and see them listed on this page. I only have the Raleigh here because that's the only bike I have in the program at this point, but it's infinitely expandable, it seems. This is the page where you can list your bike as stolen if that does happen. 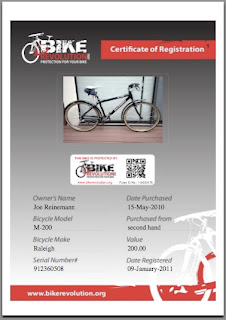 Bike Revolution/Kryptonite offer a free bar code scanner software application for smart phones that enable the phone to become a barcode scanner, read the tag and identify the bike. I already had a free app, called ScanLife, on my phone and was unable to read the bar codes with that. I tried to download the application from the website, but had trouble doing so the first time I attempted it. I'll give a shot later and see if I can get it to work, and actually scan my bike, later. For now, I figure that I get the most benefit from having the bike registered in the system. This is probably easier with a Droid or iPhone rather than my out-of-date Motorola Q, but even so, the website is not smart phone friendly, which seems really stupid.

The other minor tweak I would make to this is that I would make the stealthy stickers smaller and design them to fit in the rim, attached to the rim strip. I suppose you could stick them on the steerer column of the fork and in the seat tube, where they might be found, but I think the odds of a stolen bike being brought in to a shop for a flat tire is a hell of a lot higher than coming in for a headset. When I remember to do so, I write my name and phone number on my rims strips, since that might help a stolen wheel find it's way back to me. Seems like the stickers would be as good or better if they fit in the rim channel.

Aside from the stealth sticker size, the bar code scanner seems like the weakest link in this system. We tried to scan a bike that had been entered into the system when I was at Penn Cycle on Wednesday night and neither my phone nor the mechanics phone would register the Pulse I.D. I bet you can still manually enter the numeric code on the website, but I bet fewer people will take the time to do that.

Whether or not this will catch on remains to be seen. I think it certainly can't hurt the odds of recovering a bike. Whether bike shop owners embrace this will be one test of its success. If few mechanics take time to read the code or check the site, this will ultimately be less effective.
at 3:01 PM