Rawland Sogn 650b to 29er Conversion 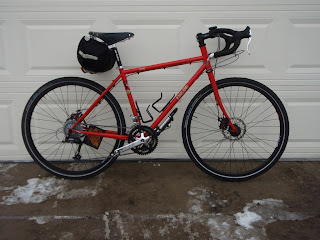 I have been riding a Rawland Sogn as my main bike since spring of 2008. One of the things that attracted me to the Sogn was the versatility of the frame. Like the Surly bikes, there is a lot of clearance for wider tires with the Rawland Sogn. In fact, with a disk brake set-up, the Sogn can run anything from 26 inch wheels to 29ers.

I built the Sogn around 650b wheels - that's what the frame is designed for and as a smaller rider, I felt that the 650b wheels were a better configuration on a small frame than conventional 700c wheels. I also favor wider tires and lower air pressure, which also points to a 650b bike. Finally, my road bikes and fixed gear are all 700c bikes, so I wanted something different. 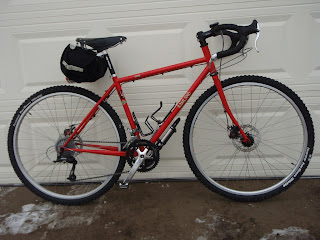 I have been very happy with the 650b choice, but in December, I got the urge to build some wheels. Not having any real need for another set of mountain bike or 700c wheels, I opted to build up some 700c disk wheels and convert the Rawland to a 29er.

The new 29er wheels are essentially identical to the 650b wheels - Velocity Synergy rims laced to Deore hubs with straight gauge spokes. The finish on the 29er wheels is silver, whereas my 650b wheels are black, otherwise the components are identical between the two wheel sets. In fact, I simply moved the existing Sram 9-speed cassette from the 650b wheels to the 29ers to preserve the gearing, which is a good match for me. 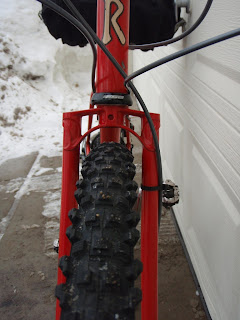 The Panaracer Fire Cross 700 x 45 tires fit easily in the front fork and rear triangle. This frame has always been a little tight when it comes to wheel base. With the 650b wheels, I could cause a toe-strike, but it was never an issue. With the 29er wheels, toe-strike at lower speeds is more of an issue, but it's not so bad that it annoys me yet. The stand over height has also come up a little more than I was expecting with the massive wheels. The frame is small enough, though, that I can still clear the top tube easily. 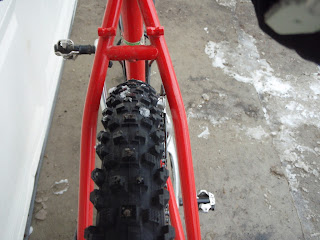 The bike rides well in its 29er configuration. It handles more like a road bike than a mountain bike with the bigger wheels, and also seems to conserve momentum a little better as well. The Panaracers were as good, or maybe better, at handling the cookie dough snow than the 26 inch Schwalbe Mount and Ground studded tires I run on my bad weather mountain bike, too. I ran the Panaracers at about 40 psi for the maiden voyage and will experiment with other pressures to get that dialed in over the coming days and weeks.

While I have only had one ride on the bike as a 29er, I am very pleased so far with the conversion. When it finally warms up, I will be eager to get this configuration on some gravel or gentle singletrack to see how it performs on those surfaces.