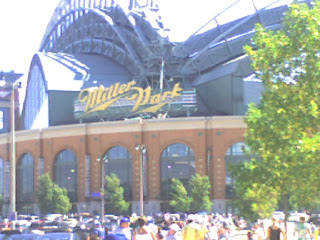 So, I got back from ANC a week ago with about 12 hours to unpack, sleep, and re-pack for a trip to the ancestral homeland on the shores of Lake Michigan. What brought this prodigal son back to the verdant lands of youth? Free baseball tickets, what else!!

My brother Johann won GREAT tickets to a Milwaukee Brewers game on Labor Day at a silent auction, and he was good enough to invite Molly and I to see the game [insert smiley icon here]. I have never been to the new ball park in MKE, and I like the Brewers on general principle, so I was glad to go. They played the Mets (meh), they lost, and it was really hot and sunny, but it was a great time. We had lunch at a restaurant overlooking the field, saw an old friend from High School, and Miller Park is absolutely beautiful. After seeing that, I am now actually more in favor of replacing the Metro Dome, which seems dim and old compared to Miller Park (my proposal for the Metro Dome is to take the roof off, fill it with dirt and turn it into a gigantic flower pot, by the way). Plus, this trip took me away from MPLS for a few days so I missed at least some of the RNC convention.

We were truly was blessed in so many ways.

Do not fear - I did not miss all of the excitement, however. I did get some of the convention vibe when came back from Anchorage and again this week when I got back from Milwaukee. The airport was literally crawling with Republicans and clean, helpful Minnesotan's waiting to welcome them to town. The Helpful Greeters were literally lined up at the baggage claim area waiting to hand the delegates white snak boxes and help them find a cab or a hooker or whatever. I tried to get one to give me a snak box and help me with my luggage, but they totally had my number and gave me the bum's rush (I must not look like a delegate).

Despite my cold shoulder introduction to the convention, I was not entirely left out. While the convention was in St. Paul, the Conventioneers were all in downtown MPLS this week!! It turns out Republican delegates tend to wander into the streets in groups with little to no regard for traffic or personal safety (much like geese), and then get pissy when you almost run them over. Here's an actual shot of a delegate from the Great State of Maine that I took from the Mighty Tundra at 7th and Marquette on Wednesday to prove my point: 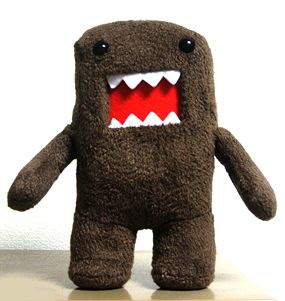