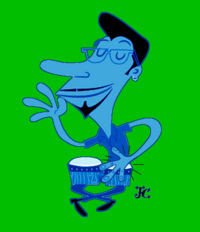 Several years ago now, I took flute lessons from a guy in Minneapolis that was a working jazz and big band musician. He played sax, doubled on flute and clarinet, and pounded out a wicked conga as well. I learned quite a lot from him in the time I took lessons, but one of the funnest parts of the experience was the exposure to "jive". This guy actually used jive in every day conversation. I think he picked it up from older jazzers and may not have even realized he was doing it.

Of course, every generation has it's jargon and slang, often used to keep the older folks at arms length, but the Beat Generation came up with some really great slang, particularly when compared to the stuff I am hearing these days. For instance, if you were at a frolic pad (like, say, a jazz club or wine bar) and the guy playing the stand-up bass had on some wild costume, you could simply observe to your friends:

Here's you chance to get hep to the jive seen. Study this link carefully. Print it out, put it in the bathroom, read it while you eat your corn flakes. Whatever you need to do. Then, once you are confident, slowly starting working these terms into you everyday vocabulary. Start small; call you co-worker "baby" and agree that the meeting was a "drag". They probably won't notice this, but then work in more words and try to string them together into sentences. Pretty soon you'll be hep to the jive and hopefully, your co-workers, friends and family will be, too. Or at least maybe they won't be "Clydes" anymore.