Exploring the Upper Limits of Dorkhood 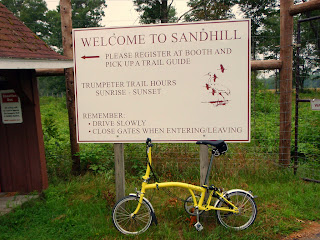 This weekend I had a short out-of-town trip to Central Wisconsin for a family function (more on that later). I knew that I would have some free time and saw this a potential opportunity to fit in two of my favorite pass-times: cycling and bird watching.

I have this snazzy new folding bike begging for adventure, so it came along on this trip. Minimally, there is a 4.5 mile trail around a lake near where I was staying, so I figured I could ride around that before breakfast or something. It's a nice short ride, but the birding this time of year is pretty thin. After a bit of internet research, I was able to up the ante.

The Sandhill Wildlife Area offered something like 14 miles of limited access trail/gravel road through Central Sands habitat, with the potential of Sandhill cranes, hawks and who knows what else. After about 3 seconds of deliberation, I planned a Saturday morning assault on the place with the Brompton and binoculars.

Biking, and specifically riding a folding bike, can be considered kind of dorky. Bird watching is also kind of dorky. Combining them like this makes for an absolute dorkgasm.

I was admittedly a little self-conscious unfolding my bike in the parking lot of Sandhill. The Brompton looks like a clown bike already, but putting on my little binoculars and hopping on the bike was the icing on the cake for this experiment in being un-cool. 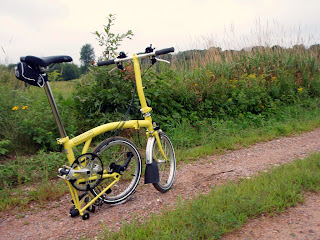 Any un-ease dissipated very quickly, however. The Brompton proved to be very capable on the gravel roads, so I was able to scan for birds while riding quite easily. Hopping off to see something was simple, and parking the bike was a 2-second operation. Once I was done, I folded the thing back up and stuck behind the front seat of my pick-up truck in about 30 seconds.

I was rewarded with 4 excellent Sandhill crane sightings, tons of woodpeckers, chickadees and other common birds, and a weasel.

Is this the best riding bike I have? No.

Is it a bike I would take on a long, loaded ride? No, again.

Would I toss this in the trunk on a road trip? Hell yes!

Would I be a little self conscious the next time I ride it? Um. Yeah, I probably would, but I'd do it anyway because it's so fun.
at 9:22 PM