Pardon the long post, but there's a lot to tell here...

Faithful readers will know that I am undergoing a "Life Change".  I've posted previously about the peculiar human instinct to re-arrange the furniture in times of change. Apparently, that restlessness spills over into other areas as well... 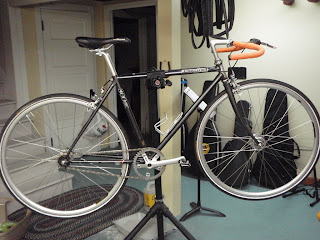 In the past month or so, I have bought and sold more bikes than in the past three years.

My Bridgestone fixed gear was the first to go. It was sold to a nice young man looking to upgrade his ride. This was a nice bike - it started as a Craig's List find (classic ten-speed) that I converted to fixed gear, partly for the experience of doing a conversion and partly to give fixed gear riding a try. After a decent go, I determined that I am too much in love with gears to ever be a serious fixed gear aficionado. This one hung from the rafters for too long, so it was time to go. 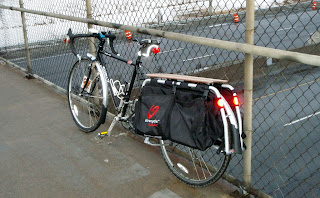 Another bike that's "out" is my Cross Check/Xtracycle. I bought the Cross Check in Anchorage back in 2004 or so (after reading all the orgasmic reviews on Bike Forums). Somehow, the Cross Check didn't do it for me. I may be the only person that doesn't like a Cross Check.

I commuted on it (a lot) for two more years in Anchorage, rode it another two years back in MPLS and finally picked up the Rawland Sogn, which became my "do-everything" bike. The Cross Check grew an Xtracycle add-on at that point.  This was a cool set-up, but I found that I didn't use the cargo bike enough to justify the garage space that this unit was taking up, so I sold it (for a fair price) to a friend last week. 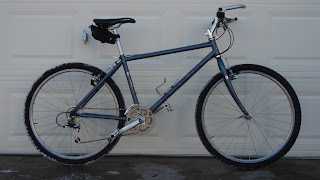 I also sold a very nice old school Marin Pine Mountain MTB. This bike was beautiful. It was steel, but very light. Beautiful paint (silvery blue) with high quality components from the mid-'90's or so. I picked this up on consignment from the Hub because it was so nice, but the niche I was trying to fill at the time was "bad weather commuter" and this bike was just too nice for that duty. I found a better setup (for $60!) and stopped riding the Marin unit once I had the replacement configured. Eventually, it became evident that this bike needs to move on to someone who would ride it.

Nature abhors a vacuum, so I've added to the stable, of course. 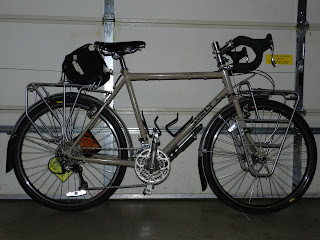 The first addition (which I have posted about previously) is the Long Haul Trucker. I am a little embarrassed to say that I bought this bike on the first morning I was Liberated from Labor. It rides really well. It's a 52 cm frame, which is bigger than I normally ride, and it's way more Grant Peterson than any of my other bicycles.

I kind of kick myself over going LHT, but despite the hype, it's really a great bike - 26 inch wheels, which works with the smaller frame, steel (it is real, after all), very stable and smooth, yet stiff on climbs, etc., etc. I like it a lot and hope to ride the snot out of this, as well as teach on it. I stumbled into a really good deal on Surly racks, so I got this tricked out in full touring mode, although I am not a "touring cyclist" just yet. Maybe a few S24O's in my future, but until then, this is mostly posing. 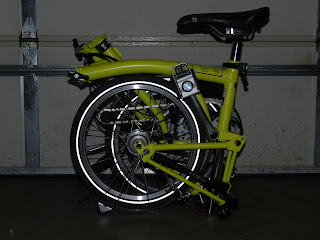 The second (and most enjoyable) addition has been a lemon-yellow Brompton folding bike. We found a great deal for The Spouse on a Dahon Boardwalk via Craig's List earlier this summer, and that got us thinking about the potential of folding bikes. After borrowing a Brompton from a friend, I decided that it was time to sample this cycling goodness. I used the proceeds from the X-Check/Xtracycle to cushion the expense of the Brommie, and I couldn't be more delighted. 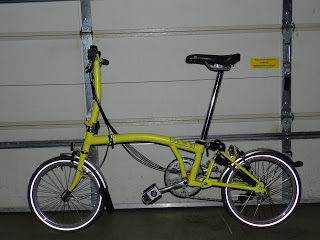 You can't help but giggle when you ride this bike. I opted for a six-speed set up in a bright, optimistic lemon yellow.  The gearing is quirky as hell - a two cog combination on the rear wheel mated to an internal SA 3-speed hub. Lots of cross shifting, but it's become second nature after a few rides, and it' tons of fun to ride (It has 16-inch wheels - I believe that I can turn a complete circle in an elevator on this bike).

Our plan for the folders is to pack them up and take them to State Parks and towns we spend a weekend in. We love to ride around small towns and see the sights from a bike saddle, and these will make that ever so much more easier.

I still have two nice road bikes that don't see much action, and the Rawland and I are on trial separation at the moment, so there might be some more horse-trading in the future. For now, I am pleased with the realignments, though.
at 11:05 PM