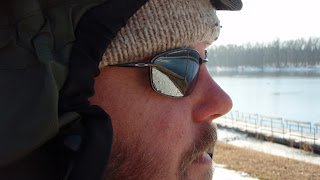 By third grade, I ended up in special ed, or whatever they called programs for developmentally disabled kids back in the early '70's. I found myself in a small, windowless room, working with a guy who wore a mustache and a sweater vest every day. We did exercises like arranging blocks to match a pattern on a piece of paper. Red cross in white field? Got it! White square in a red field? No problem, Buddy!

As my education continued to falter through third grade, we plodded our way through the diagnostics, trying to figure out what what was "wrong with this kid". Eventually, we worked our way up to some worksheet with three columns on it. The first column was numbered 1 - 10, the second column was 11 - 20 and the third was 21 - 30 or something. At any rate, I worked away at my little 'tard worksheet with #2 pencil until I ran into a problem - I had run out of worksheet before I ran out of questions.

This was a watershed moment for both me and the Special Ed teacher. I concluded that I am, in fact, a moron. There was something seriously wrong with me and I would be in Special Ed forever. The teacher (God bless him) reached another conclusion - he looked at the worksheet (I had filled in the first column and the third column, and skipped the middle column altogether) and wondered aloud why I would make that mistake.

"You are going to the eye doctor!" he almost yelled at me.

It turned out that I had congenital cataracts - a birth defect, very rare in fact. I could barely see out of one eye and had abandoned that one in favor of the other (which was not working all that well, for that matter). That explained why I missed the center column and couldn't comprehend anything that was written on a black board, and the eye tests confirmed it - I simply couldn't see for shit.

After this epiphany, the summer of third grade and fourth grader were devoted to complicated eye surgery and lengthy recovery. Cataract surgery in the mid-'70's was a big deal - it was not an out-patient thing like it is today. I was in the hospital for a week each time, sleeping with my head elevated and monitored like a heat patient or something. No swimming, no sledding. No fun.

By fifth grade, I could see (with the help of coke-bottle glasses), My recovery was more far-reaching than just vision. I swam competitively in high school (despite being blind without my glasses). I taught myself guitar and flute. Somehow, I picked up the reading and writing in spades, but math continued to flummox me. I was not been able magically absorbed all that math I missed.

The stigma of the coke bottle glasses was with me until high school, when I started using contact lenses. In 1997 I had secondary lens implants and now wear "normal" glasses. However, the math problem could not be resolved with technology, and I built up a case of Math Anxiety that continues to this day.

If I had been better at math, I would probably have been climatologist, or perhaps a mechanical engineer.  Playing the cards I was dealt, I ended up a geographer and environmental consultant with a flair for governmental relations and regulatory policy (which is not a bad gig, actually). I learned a lot and proved that I was not a moron after all.

That said, I still have a bit of a chip on my shoulder over this whole ordeal although it's been a long time since this all played out. I can't help but wonder about the road not traveled...
at 7:30 AM