The Lesson of Achilles Heal 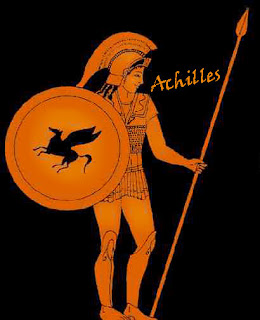 Sometimes it's the little things that can stop you cold. The ancient Greeks understood this well, hence the legend of Achilles and his eponymous heal. Let's look to Wikipedia to remind us of that story...
"According to a myth arising later, his mother had dipped the infant Achilles in the river Styx, holding onto him by his heel, and he became invulnerable where the waters touched him -- that is, everywhere but the areas covered by her thumb and fore-finger."
We know the rest - Achilles was invincible and kicked ass all over ancient Greece until the point where some guy named Paris (of all things) nailed him in the ankle with one well-placed arrow. The rest was (pre)history.
Why am I thinking and writing about Achilles tonight? Because my own personal "Achilles heal" has been revealed, and it's a little north of the heal, but south of the heart, if you get my drift. I have been plagued with bike-saddle-related "skin problems" that have complicated life on the bike for a few weeks now. The good news is that I think I have found the solution and seem to be well on the road to recovery, but still, this has been an eye-opener. The interesting thing is that something as small as this can knock off of your goal.
I have heard that in the infantry, they drill soldiers on the importance of dry socks and foot care (can't vouch for that - I am 4-F but it's from a reliable source). Bicyclists should learn from that and pay attention to the little things. I am struck by how a little problem like this can make the larger goals all but unobtainable.
at 7:42 PM