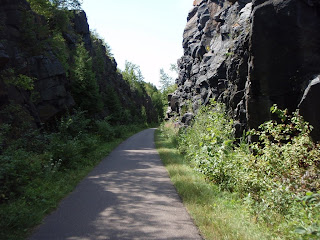 With the summer season rapidly drawing to a close, I wanted to get in at least one longer recreational ride before the snow flies. Having never been on the Willard Munger Trail, I thought that sounded like a fine trail to explore. We set our sights on the Munger Trail two weeks ago when I was on vacation. Unfortunately, the weather did not cooperate and I ended up bagging that plan altogether.
Last Sunday promised to be a much better day, so we set out for Duluth in the morning with my bike on the truck. The plan was for me to ride the trail from Duluth to Hinckley while the spouse would explore Jay Cooke State Park and some of the other parks around the region. She dropped me off at the Duluth trail head and wished me well and I set off on my first longer ride of the season. This was originally going to be a ride with a friend and co-worker, but he ended up getting married and having a family, so he wasn't available and this turned into a solo ride. 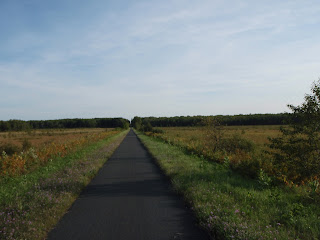 I have been pretty consistent on my commuting this year, but even if I ride every day of the week, with a commute that's only 10.4 miles round trip, the miles don't add up very well, so throwing in a 70-mile ride without much preparation was a bit of a gamble for me, but I figured I could do this.
All in all it took me almost 5 hours to complete; their are no significantly steep hills at all on the route, but it seemed the like first 8 miles or so out of Duluth were up hill the whole way. It's a shallow grade, so you don't realize you're climbing a hill as much as you feel slow. I finally got my speed up around Carlton and started to click of miles after that.
The most scenic portion of the ride is the north end, and the Jay Cooke State Park scenery is spectacular. The stretch to the south (from Moose Lake to Hinckley) got monotonous at times. If I were going to do this again, I would head north from Hinckley, which I think would be a better ride - you would avoid some of the head-wind by going north, and the scenery would make for better rest stops on the second half of the ride. Finally, the canyon run into Duluth would be a wonderful finish to this. I would also start out in the morning. I set out about 12:30 PM or so, and I was feeling some time pressure towards the end because I didn't want to make us late for supper. Even so, we ended up eating late. A morning start would have been better (another reason to ride from Hinckley). More photos from the ride here.
I survived the adventure with relative ease - my crotchal region is a little tender and my arms ache a bit, but my legs feel surprisingly good after the ride. It's also interesting to spend 5 hours alone with yourself on a bike. I can see how some people could get into rando riding. You'd sacrifice a lot of your personal life to spend this much time on a bike, but you'd learn a lot about yourself in the process.
at 8:22 PM