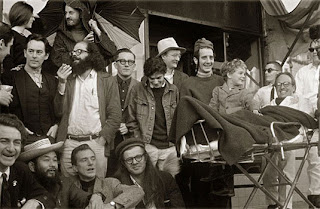 A few years ago, I had to spend a weekend on my own in Anchorage. I had two weeks worth of meetings, and it was simply not a good use of my time or my client's money to fly home on Friday only to return to ANC on Sunday night. Therefore, I spent the weekend under my own supervision, occupying myself with whatever bohemian activities Anchorage could offer me. Coffee shops, brew pubs and movies were about all I could find despite having lived there for almost three years and knowing all the local haunts.

One thing I did was that I took myself to see the movie Cool School, which was showing at the Museum. For those that have not seen it, Cool School is a documentary about the nascent modern art scene in Los Angeles of the 1950's. In a nutshell, a group of artists rejected the "New York is the Center of the Art World" paradigm and struck out on their own, smashing paradigms, creating  modern art, stirring up controversy and having a great time in the process. In a similar fashion, Kerouac, Ginsberg, Burroughs, Corso, et al, created their own scene in the 1950's to form the Beat or Beatnik poetry school in that same era.

I have this crazy beautiful dream that we can do something similar to that with the various and assorted Minneapolis Bike Bloggers. We each have our own voice, our own reason for doing this and our own perspective, yet together we make up a common voice (or I guess... a chorus?). Build off of each others ideas, motivate each other to push boundaries and challenge our creativity and explore new material. Create our own scene.

Maybe that's a crazy dream - I do have those periodically. But, that's part of what's gotten me excited about contributing to Cycle Twin Cities. It's an open and collaborative venue for diverse voices of cycling in the Twin Cities. I've found that this has spurred on some creative energy that I've been lacking lately, and I've been recruiting a few friends to join in this scene as well.

It's an exciting time behind this computer.

Ride safe, go to the Bike Expo this weekend and/or go for a ride - the weather might just be getting a little better.
at 9:10 PM